Don't you just hate it when you plan a journey and there are engineering works!

There are engineering works on my local train line each weekend during September, I need to travel this weekend and next Saturday is the 2nd Great London Yarn Crawl!

Last year two friends Rachel of Porpoise Knits and Allison of Champagne and Qiviut had a great idea. Both knitters, as newbies from across the pond a couple of years ago, the pair enjoyed exploring the many yarn and fabric stores there are in this large city of London to which they have both moved.

Yarn Crawls have taken place in some US and Canadian cities for a few years so why not in our very own capital and these two set out to make it happen. After months of planning over 70 knitters spent a day travelling in 5 colourful groups under the direction of volunteers around London each visiting 4 different yarn or fabric stores. Rachel and Allison had thought that most participants would live in London but they were wrong with an equal number travelling into the city from all over the South of England and possibly further.

Meeting in a local coffee shop, each crawler received a goody bag and, after a little refreshment and a chance to freshen up following their initial journeys, the members of Purple Route started with  Loop in Islington, possibly the holy grail of yarn stores to knitters in the know.

Moving on by bus to The Handweavers Studio and Gallery in Finsbury Park, where the spinners amongst the group were in seventh heaven cooing over spinning wheels and fleece. Then tube and bus to West Hampstead and  after a stop for lunch to The Village Haberdashery who stock a lovely range of fabric as well as yarn.

And our last store was Sharp Works in Herne Hill, which provided a small bank of cinema seats in the shop to rest the weary legs of  the by now tired crawlers.

Heavy with their day's purchases the crawlers took their final train and tube to the after party in a pub near Waterloo, where all the 5 routes met together to show off the day's haul, have a drink and cross their fingers that they might win one of the many lovely door prizes that were up for grabs. I with my usual luck in raffles and tombola's won nothing!

There was, of course, plenty of time for knitting on the day and needles came out whenever the chance arose.

Although this was all great fun and an opportunity to spend money, there was also a more serious note to the day. The profit raised from the event was donated to Refuge, a charity who help women and children in situations of domestic violence.

This year's crawl takes place on Saturday 20th September and there will be even more crawlers on the 9 sheep named routes so an much bigger venue for the after party has been sort at Kings Cross. Most of the routes are sold out but if you hurry you could just get one of the 2 remaining tickets here.

And what's on my needles right now? 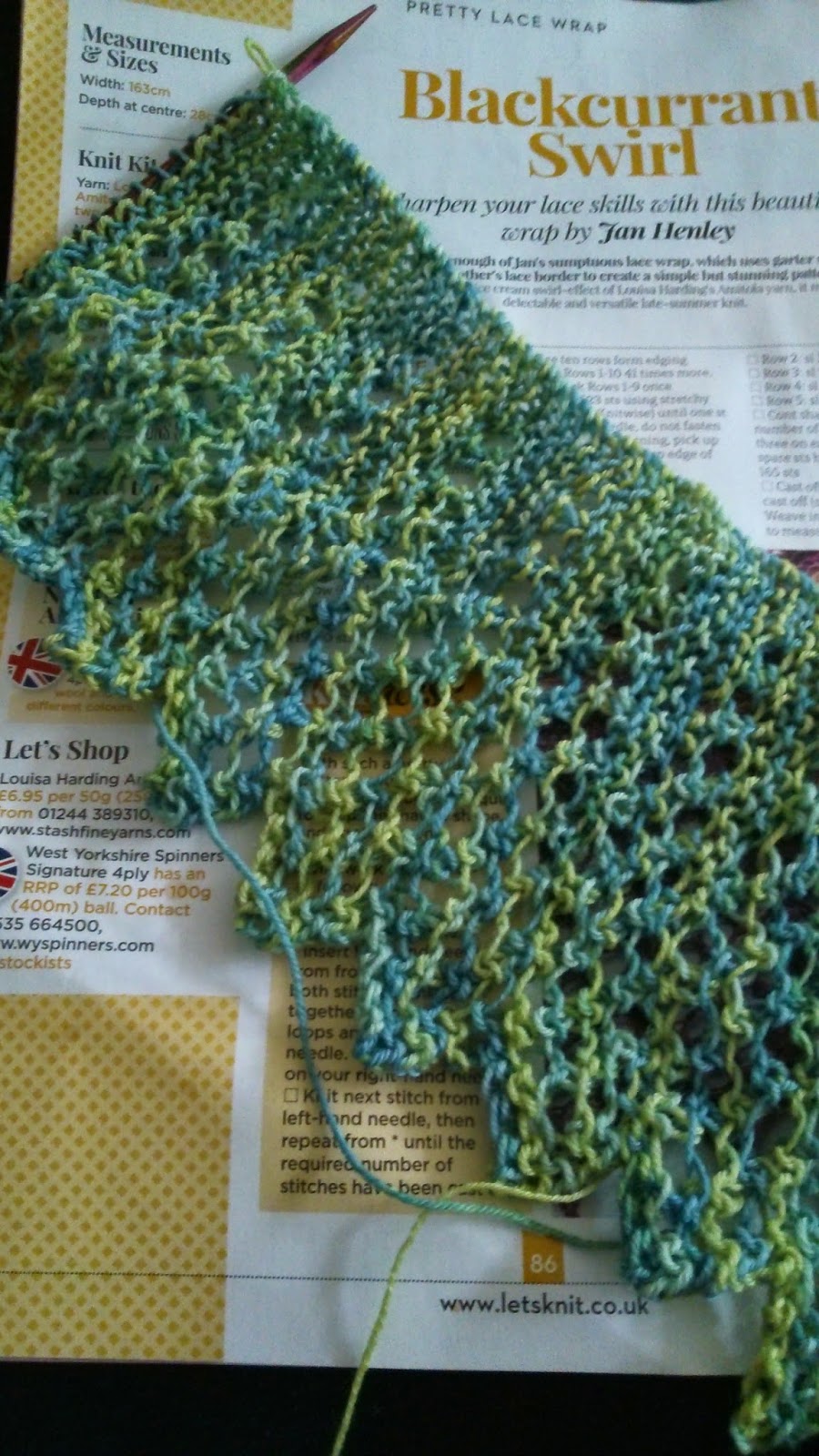 I've knitted a couple of things since my last blog.

I have finished Blackcurrant Swirl from August Lets Knit issue 82 in The Natural Dye Studio Dazzle HT sock yarn in a blue green yellow colour way called Weir Waters Wood but still have to block it. 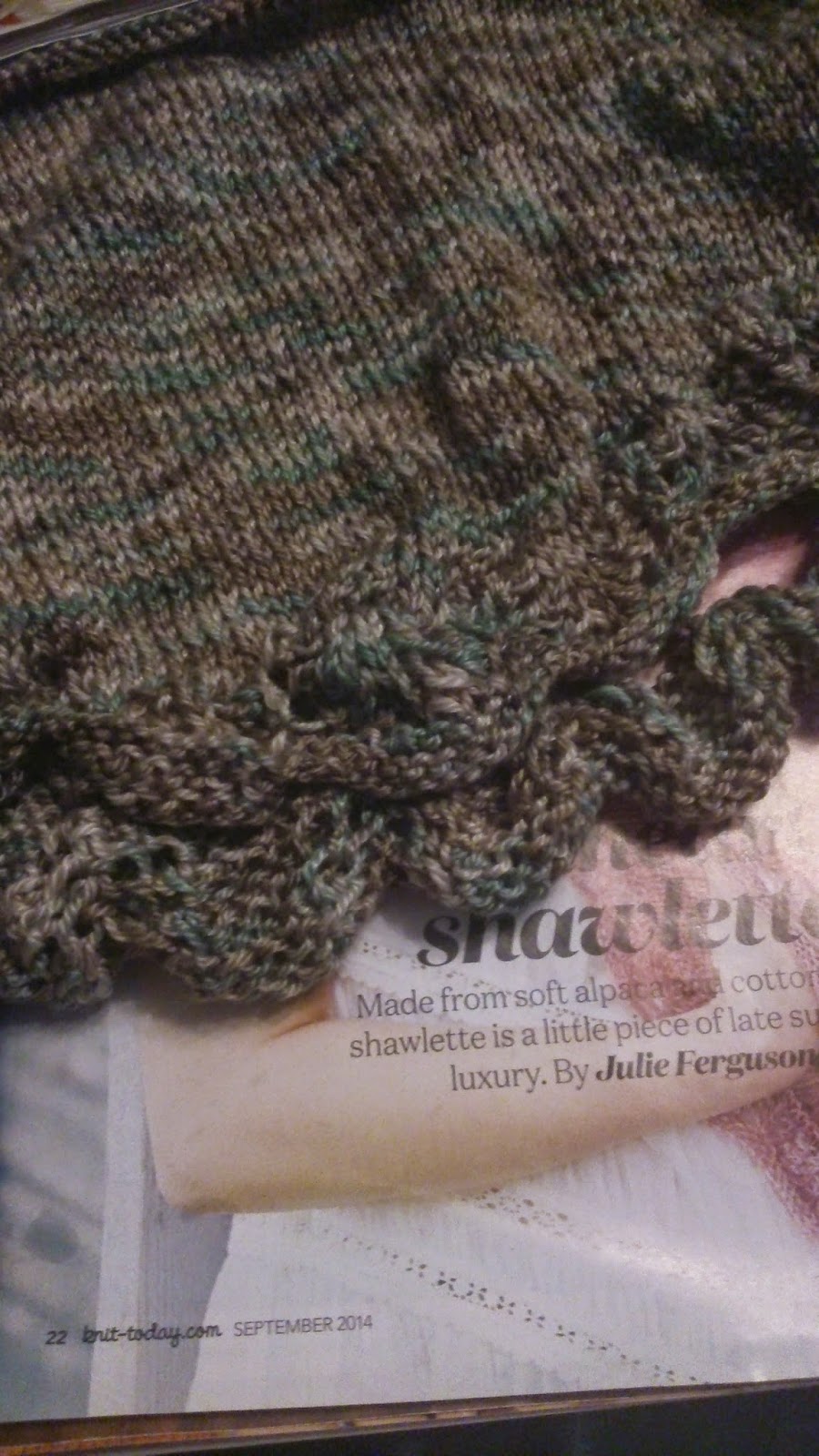 Also the Sweetheart Shawlette from September issue 102 of Knit Now magazine. It is knit in Juno Fibre Arts Mytle yarn which is a mix of  50% Merino and 50% Tencel in an unusual colour called Undercover.The yarn was great to knit with and the pattern was a very quick knit, I finished it in 10 days which surprised me as I only knit at lunch time, in the evening or at weekends. Unfortunately Juno Fibre Arts are giving up dying yarns and their Etsy shop will shut at the end of October.

Both these shawls form part of the study of shawl anatomy which I am undertaking to understand the construction of the various styles which I hope might help me to start designing. You will have to watch this space on that one!

I welcome your comments which will be moderated before they are published.

SallyWool
Hampton, Greater London, United Kingdom
Having been a single parent I now find myself with an elderly mother, a graduate son and a black cat. Knitting has kept me company on and off for more years than I care to remember and will do so for a good few years yet.